The Future of Libraries

Our image of the library has gone unchanged for decades, if not centuries: a peaceful, quiet hall of knowledge where one can expand their mind and discover new worlds on the page. Though the contemporary library continues to exist as this type of scholarly oasis, the widespread use of digital archives not only offers new possibilities for library services – it also requires that libraries adapt in order to keep up.

Syracuse University
Featured Program: Syracuse University offers an online MS in Library and Information Science. The program can be completed in 18 months and includes the option to specialize in School Media. No GRE required.
Request Info

University of Denver
Featured Program: University of Denver’s Morgridge College of Education offers an online, ALA-accredited Master of Library and Information Science program. Learn from practitioners and gain the service-based skills needed to connect communities with information in the digital age. No GRE required.
Request Info

Arizona State University
Featured Program: The Master of Arts in education with a concentration in literacy education will equip you to be a literacy leader in any educational setting.
Request Info

With so much information at our fingertips, it’s fair to ask, will libraries be relevant in the future? It is an unavoidable truth that many who don’t already know the joys of the library will assume that they can find everything they need from the comfort of their own search bar. But libraries offer a seriousness of purpose and an integrity of resources that should be protected and, if anything, enhanced by advancements in library technology. They also are a vital resource for low-income communities, offering access to scholarly materials without paywalls. Though it must be acknowledged that the present-day library is under threat, there is hope that we can look to the future of libraries with optimism and even excitement.

The Shift to Digital Library Services 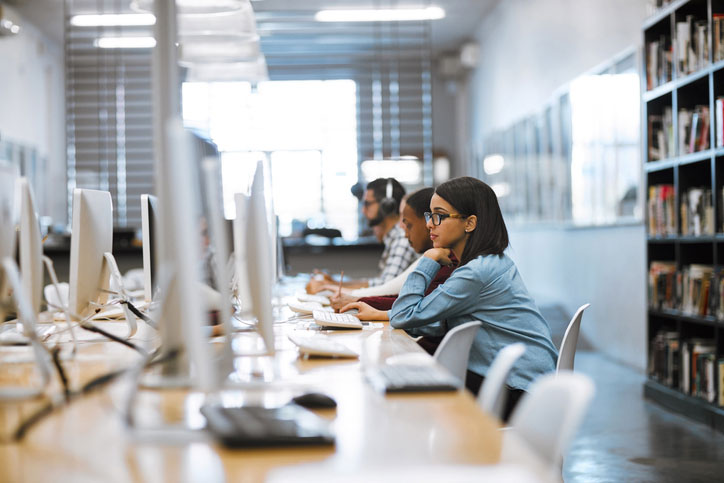 The most visible trend in library technology is the expansion of electronic materials and the shift toward digital delivery of libraries’ existing archives. This is true for public libraries and academic libraries alike, who have faced pressure to keep up with the needs of patrons in the information age. By easing the convenience of access to their archives, libraries are hoping to bring in new visitors and introduce a new generation of users. Many also see this shift toward a more digital focus as a safeguard of credible information in a moment when anyone can upload content to the Internet. Because libraries have transitioned toward a stronger concentration on information and digital literacy, they have begun to ensure that there will always be a home for verified, legitimate resources to combat the rampant spread of misinformation.

The Effects of the Pandemic on Libraries

No force has been more transformative of library services in recent years than the arrival of COVID-19, which effectively shuttered the physical doors of libraries worldwide. In order to sustain engagement, it was imperative that libraries streamline their existing digital services, allowing their patrons continued access to their resources without interruption. Indeed, the Institute of Museum and Library Services reports that within the first three months of the pandemic, nearly two-thirds of libraries enhanced their online offerings to the public, expanding their online resources and creating virtual programming to maintain patrons’ engagement.

One could argue that the impetus to improve library technology is a good thing, COVID aside. Even prior to the pandemic, the future of libraries was already in question, thanks to the rise of online archives and the simultaneous waning of public interest in print resources. Libraries had already begun to put more of their resources into new technologies and pivot away from physical materials. This investment in digitization proved to be a boon for libraries during the early days of the pandemic, and the trend toward expanding online resources is only continuing to escalate. 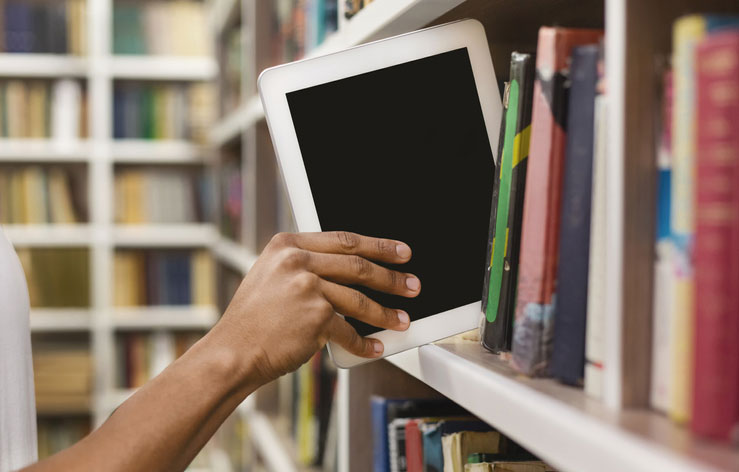 A major phenomenon introduced by the Internet is a culture of personalization and immediacy. This has been one of the biggest threats to traditional libraries, as contemporary readers and learners have grown to expect instant access to whatever kind of information. In other words, people have become more impatient: What older generations might have seen as the joy of taking deep dives into the book-lined hallways of libraries is seen by younger generations as an inconvenience and, in some cases, an all-out dealbreaker.

This means that interface optimization and user customization have become some of the biggest priorities in library technology. When people feel like their library experience is unique to their interests, either professional, academic, or personal, they will be much more likely to engage in different library activities.

Building a base of lifelong users is crucial to the future of libraries, which means personalization must be not only developed but continuously re-imagined as technology continues to evolve.

While developing the technology to create a personalized user experience is no easy feat, studies indicate that the investment is worth it. A report by EBSCO explains that offering individualized services such as saved projects, search histories, and other user-focused features not only creates a better experience in the short term, but also increases patronage in the long term.

As libraries continue to innovate for a digital future, they do face logistical and economic challenges that they will need to resolve. From widespread budget cuts to resistance from ebook publishers, libraries have many hurdles to traverse in order to stay in step with contemporary patrons’ needs.

Unfortunately, recent years have seen library budgets dwindle, often as a direct response to the rise of the Internet and the sentiment that other online archives are rendering libraries obsolete. This has only intensified because of the pandemic, which saw further reductions in resources allocated to libraries. However, many libraries have treated these budget cuts as an opportunity to streamline some of their services, pushing toward automation to help make the most of their investments.

In the push to become more efficient, many institutions have turned to the following solutions to enhance library technology:

Many of these strategies are still being refined and developed, but it’s certain that the coming years will see improvements and advancements in library technology to keep up with the changing digital landscape.

Over the past several years, major ebook publishers have greatly reduced their digital offerings to public libraries in order to increase sales on their own platforms. As the Washington Post reports, in 2020 Amazon stopped selling its downloadable books to libraries, in a move described by the American Library Association as “the worst obstacle for libraries” in expanding their digital offerings.

In order to take control of digital delivery, libraries will need to secure licensing agreements that don’t undermine sales for ebook publishers.

What does this look like? To start, it means adopting controlled digital lending (abbreviated as CDL), which restricts the lending of digital files so that library patrons cannot share ebooks with outside users. This is largely a question of developing efficient lending platforms that host popular ebooks without making them available for direct download.

There is another beacon of hope for libraries of the future: many states, including New York and Rhode Island, have begun introducing policy proposals that would require publishers to offer licenses to digital materials under “reasonable terms.” There are also federal-level proposals, such as the Library Stabilization Fund Act, which aim to expand library budgets and provide relief from the budgetary hardships of the pandemic.

While these initiatives have not yet received senate approval, they are an indication that lawmakers care about protecting libraries in the digital age. We are still, after all, in a “Wild West” moment in the transformation of digital publishing, and it is possible that state regulations will create the impetus for ebook publishers to reach deals with libraries that are beneficial to all, in particular to low-income library patrons who otherwise would not have access to their ebooks.

The Place of the Traditional Library in the Digital Age 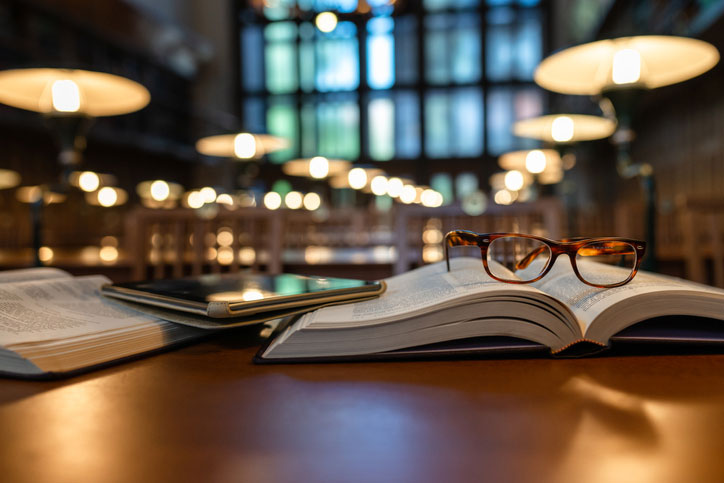 Although libraries are focusing many of their efforts on the digital sphere, there is still great value in the brick and mortar library, not only as a place to preserve the romantic idea of the hall of knowledge but also because of the continued relevance of in-person resources. Though the Internet can solve many problems, a face-to-face conversation with a knowledgeable librarian is still unmatched as a means to enrich one’s scholarship. As the New York Times reports, libraries have also begun to provide amenities like free wi-fi and social services so that they can continue to serve marginalized communities who rely on their services in order to maintain their professional lives.

In order to enhance their in-person services, libraries are following many of the directives that they’ve followed in developing their online platforms: increased efficiency, greater personalization, and better tracking of users’ needs. In fact, achieving these also means making use of new library technologies, allowing automation to do parts of librarians’ jobs so that they can focus on the most irreplaceable aspect of their jobs – namely, making themselves available to engage directly with library users.

Playing Your Part in Shaping the Future of Libraries

The quickly transforming field of library science is an exciting and vital space, not in spite of the pressure to digitize but because of it. Important jobs related to the development of libraries are continuing to grow across library and other learning environments, from media specialists to school librarians and everything in between. In fact, the demand for librarians is projected to grow by 9% through 2030, according to the Bureau of Labor Statistics.

To join the ranks in creating a stronger, more equitable future for libraries across the country, learn more about the country’s best online programs for Master’s degrees in library scienc

How the university and programs are thought of by peers.

How the program ranks in major ratings publications.

A measure of search volume about the university and degree program.