What is Multicultural Literature?

Connecting with a novel can be life-changing. As the characters in a book struggle with love, loss, morality, and mortality, readers can feel that their own obstacles are parts of the universal human experience. Isolation melts away. Fears are identified and picked apart in beautiful prose.

Syracuse University
Featured Program: Syracuse University offers an online MS in Library and Information Science. The program can be completed in 18 months and includes the option to specialize in School Media. No GRE required.
Request Info

University of Denver
Featured Program: University of Denver’s Morgridge College of Education offers an online, ALA-accredited Master of Library and Information Science program. Learn from practitioners and gain the service-based skills needed to connect communities with information in the digital age. No GRE required.
Request Info

Arizona State University
Featured Program: The Master of Arts in education with a concentration in literacy education will equip you to be a literacy leader in any educational setting.
Request Info

For society’s more marginalized populations, though, that kind of validation is often out of reach. According to a School Library Journal survey, only 34% of school and public librarians feel like their collections reflect their communities’ demographics. How can the world become an equitable place when so many people are underrepresented?

Fortunately, according to data gathered by that same survey, 81% of librarians believe that stocking diverse literature is vital to their institutions’ missions. But what is multicultural literature exactly? Why is it important to social, mental, and emotional health? And how can librarians bring diversity in literature to the masses? 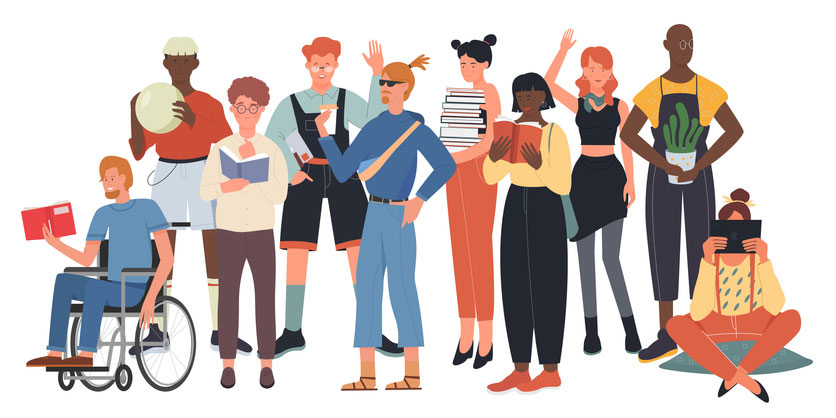 The Importance and Characteristics of Multicultural Literature

Learn More About How To Become a Librarian That Promotes Diversity

The Importance and Characteristics of Multicultural Literature

Multicultural literature isn’t a single genre. It can be literary fiction, fantasy, mystery, memoir, and really anything else a writer wants it to be. But no matter the genre, authentic multicultural works often share characteristics that enrich them with unmatched perspective and valuable insights.

Cultural Identity and Context Are Central

Culturally-representative literature explores culture in specific, meaningful ways. Characters’ thought processes, actions, and experiences are shaped by the cultural contexts they live in. In that way, cultural context and identity aren’t afterthoughts — they’re main components of the work’s structure and themes.

Take, for instance, the crime thriller Chinatown Beat by Henry Chang, a second-generation Chinese-American writer from Chinatown, New York. The novel has all the trappings of other works in the genre like gruff detectives and shadowy gangsters. But Chang lays these tropes on top of the nuanced and very real cultural struggles that urban Chinese-American immigrants face: exploitation, racist law enforcement practices, and the challenge of forging a future without forgetting the past.

In Chinatown Beat and other multicultural works like it, these specific experiences are central. They’re described with the precision readers with similar backgrounds can relate to and readers outside of the culture can gain insights from.

It Avoids Turning Differences Into Novelties

Mainstream literary works often use cultural differences as set pieces. They’re written about broadly and used solely for effect. While this practice can make others aware of different cultures, it can also reinforce stereotypes and reduce minority groups to mere curiosities devoid of complexity.

There’s a world of works that navigate this issue with extreme agility. For example, Yaa Gyasi’s historical fiction novel Homegoing tracks the descendants of two half-sisters from Ghana. One is sold into slavery and sent to America while the other marries an English aristocrat. The generations that follow aren’t representative of one homogenous group, but members of different cultures dealing with the scars of colonialism in completely personal ways. 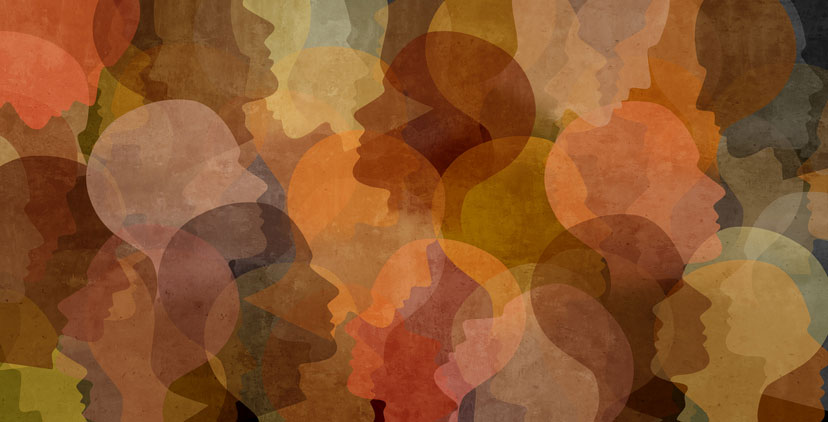 Outsiders may see the superficial similarities between different African and African immigrant cultures and ignore the complexities that exist between them. At best, this results in ignorance. At worst, it results in racist views that damage huge swaths of society for centuries.

When stocked with intricate works like Homecoming, libraries can become sources of cross-cultural insights that keep society from viewing different cultures as monoliths. At the same time, specific marginalized groups can feel represented by media that portrays them as the complex humans they truly are.

It’s Written By Authors From Cultures Outside of the Mainstream

Promoting diversity in literature isn’t just about the literature itself. It’s about the historically ignored voices of women, people with disabilities, people of color, and members of the LGBTQ+ community. Even in an increasingly diverse world, these voices can be drowned out by the mainstream.

According to a survey conducted by equity-focused publisher Lee and Low Books, the American publishing industry is:

To be heard, authors from discriminated-against groups still have to traverse a predominantly straight, white, neuronormative industry. Some self-publish instead or seek publishers that specifically spotlight minority voices. Whatever route these authors take, though, including them in library collections spreads the message that their voices matter — that every kind of person has value in the world.

The Impact of Diversity in Children’s Literature

Children often explain experiences in comical ways that make sense to their developing brains. Bumps in the night are boogeymen. An upset tummy is butterflies. These rationalizations are generally harmless, but if children are deprived of conversations about cultural differences, their novel worldviews could set them up for future prejudices.

They may see people of different races as bad or scary. Their classmates with developmental disorders or same-sex parents become outsiders. Likewise, children in minority families may internalize negative social cues and develop severe identity issues before they even learn their times tables.

According to the American Psychological Association (APA), these prejudices often form earlier than parents realize. Babies frequently demonstrate racial biases by the time they’re three months old. The APA also notes that by age four, American children commonly associate whiteness with higher socio-economic status. Despite this, a survey shows that many parents don’t start conversations about cultural differences until around a child’s fifth birthday.

Children’s books featuring diverse characters can help parents and educators explain cultural differences in age-appropriate ways. For children from marginalized communities, knowing that they’re represented positively in media from an early age can build a sense of self-worth that may otherwise be unavailable to them.

Overall, promoting diversity in literature early in a child’s life can be vital to their emotional and social well-being.

On the surface, a librarian’s training seems a bit dry and academic. Through library science Master’s programs, they learn how to organize vast physical and digital collections, help patrons conduct independent research, and balance sometimes slim budgets. But those same skills put them at the forefront of promoting diversity in libraries and the communities they reside in. 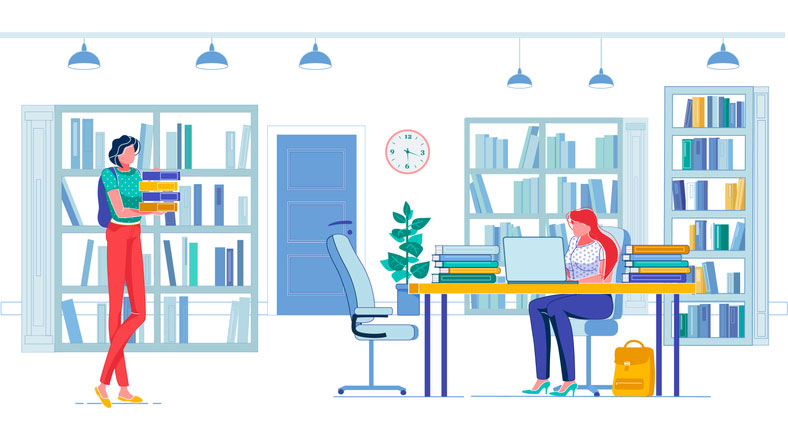 With a mind for inclusion and training provided by a Master’s library science program, librarians can:

In many library science programs learning how to promote diversity in libraries is part of the curriculum. However, this education can continue on the job. By listening to patrons and drawing in new ones from marginalized groups, librarians can champion diversity in literaturein a way that truly serves the community.

Librarians are in the unique position to learn about their communities’ cultural divides and create ways to overcome them.

Learn More About How To Become a Librarian That Promotes Diversity

Upholding diversity in literature is only one way librarians make public, school, and academic libraries more equitable. Some careers in librarian science focus more on bringing technology to underserved communities while others involve teaching essential research and digital literacy skills. Now, learning the skills often needed to fill those roles is more accessible than ever before.

Explore some of the best fully-accredited online Master’s in Library Science degree programs available today and find out how you can become a champion of inclusion in a world that desperately needs it.

The Most Effective Strategy to Fight Substance Abuse: Prevention

The most effective way to fight addiction is by acting early to prevent drug use among young people. Studies have shown that early use of drugs increases the likelihood that one will become addicted. Evidence-based prevention programs exist to spread awareness about the harmful consequences of drug use, using deeply researched educational strategies that have been shown to effectively reduce early use of tobacco, alcohol, and other substances.

How the university and programs are thought of by peers.

How the program ranks in major ratings publications.

A measure of search volume about the university and degree program.